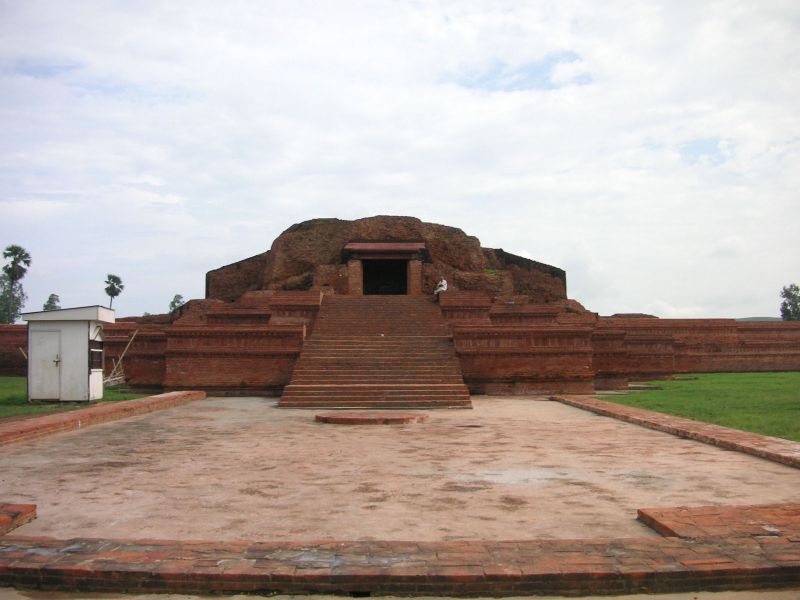 Vikramsila is  situated in the state of Bihar, India. It lies  at Antichak Village, Kahalagon, Bagalpur District.  Vikramasila was said to be a sister institution of Nalanda One of the popular Buddhist destinations in India, Vikramshila cannot boast of a direct relation with Lord Buddha. It is mainly renowned for being one of the most significant centers of Tantric Buddhism, in the 8th century AD. It also houses the famous Vikramasila University, the main intellectual as well as learning center of Tantric Buddhism.

This place was situated in Magadha on the banks of the Gangas not very far away Nalanda.  Tibetan sources inform us that this monastery was situated in Bihar on a hill on the right bank of the Ganges. Mr. De’s identification of Vikramagila with Patharaghata hill, 24 miles to the east of Bhagalpur, seems to be correct. Vikramshila also lies very close to Champanagar, another famous Buddhist destination in Bihar.  The place is full of ancient and extensive ruins, and may yield a rich reward to the excavator.

Vikramasila monastery / university, founded in the 8th century, was a famous centre of international learning for more than four centuries. The University was founded by a monk called Kamapala, under the patronage of King Dharmapala. (AC 770-810) , a Pala king. .), the devout Pala king who loved to call himself Paramasaugata (chief worshipper of the Buddha) and was a great patron of the Mahayana sect of Buddhism.. The King granted land-endowments for its upkeep Dharmapala The center of the university once had a huge temple, adorned with a life-size copy of the Mahabodhi tree. It is said that approximately 108 temples were constructed around it. Out of these, almost 53 temples were dedicated to the study of the Guhyasamaja Tantra.   Later King Yasapala also patronised the institutions by liberal land endowments. Under the Pala Kings Vikramasila rose to a positions when it rivalled Nalanda and bade well to outshine it.

It is said to have included a hundred and seven temples and six colleges.  In the centre of the university was the main lecture-hall. It was called Vidyagriha. The entrance of the main temple stood guarded by two brilliant statues of Nagarjuna and Atisa Dipankar (a great scholar of the Vikramasila University).

In Vikramshila stupa built for the purpose of worship is a brick structure laid in mud mortar and stands in the centre of the square monastery. The Stupa was a sacred solid structure raised over the body remains or belongings of buddha or a distinguished monk; or to commemorate any event associated with them. The two terraced stupa is cruciform on plan and about 15 meters high from the ground level. The lower Terrance is about 2.25 meters high from the ground level and the upper terrace is at a similar height from the lower side. At both terraces there is a circumbulatory path, the lower about 4.50 meters wide and the upper about 3 meters wide.

There were six entrances to this building and near each entrance was a monastery for resident monks about 150 teachers were accommodated in each monastery. Like Nalanda Vikramasila was also surrounded by a high-wall. There were six Dvara Panditas i.e Professors who examined candidates seeking admission. Here too high standards were maintained. 108 Professors were engaged in teaching and administrative duties.

The monks of the University were usually distinguished scholars and the fame of the monastery soon spread beyond the Himalayas. There was continuous intercourse going in between Tibet and Vikramasila for four centuries, A special guest house was maintained for the use of Tibetan scholars coming to learn at the feet of Indian Pandits.  One cannot help admiring the continuous tradition of high scholarship that was maintained at Vikramasila throughout its history. Tibetan sources inform us that Buddha, Jianapada, Vairochana, Rakshita, Jetari Ratnakara-Santi, Jiana-sri-mitra, Ratnavajra, Abhayankaragupta, Tathagata-rakshita and a host of other Vikramasila scholars wrote numerous books in Sanskrit and translated scores of them in Tibetan. The most distinguished in this galaxy of VikramasIla scholars was undoubtedly. Dipankara Sri Gnana who is also known as Atisha (AC 960-1055) was the most-famous of the scholars of Vikramasila. His fame spread far and wide as the propagator of Buddhism in Tibet Tibetans hold his name in the highest veneration.

He went to Tibet at the invitation of its king Chan Chob and played an important part in the reformation of the Buddhism of that country. As many as 200 books, both original and in translation, have been attributed to him by the Tibetan tradition.

Strength of the University:

When there was such a distinguished galaxy of scholars at Vikramasila, it is but natural that the numerical strength of the establishment should have enormously increased by the number of scholars attracted to the establishment. In the 12th century there were 3,000 monk scholars residing at the place.  The college possessed a rich and extensive library, which excited admiration even of its Muslim destroyers.

A learned and pious sage was always appointed as head of the monastery. The subjects taught were similar to those taught at Nalanda, including grammar, metaphysics and logic and ritualistic books.

Pundits who where eminent in learning were rewarded by having their images painted on walls of the university, and the title of PANDIT was conferred on distinguished scholars by king himself. Six of the most learned of the sages of this foundation were appointed to guard the gates, gatekeepers to examine the fitness of applicants seeking admission to the university.

The administrative management of the Vikramasla establishment was entrusted by the Pala rulers to a board of six monks presided over by the chief abbot. Different members of the board were assigned different administrative duties like the ordination of the novices, supply and supervision of servants, distribution of food and fuel, assignment of monastic work, etc. Monk professors led a simple life, the cost of maintaining one of them being equal to the cost of supporting four ordinary monks.

Tantric Preceptor   in chronological order were

According to scholar Sukumar Dutt, Vikramaśīla appears to have had a more clearly delineated hierarchy than other mahaviharas, as follows:

Vikramasila was managed by a staff of Professors. They constituted the Board of Education, Board of Administration, Board of Discipline and the Board in charge of entrance examinations. Inaugurated in about 800 A.C. it graced the land until it was demolished by the Muslim invaders.

Academic administration was vested in a council of six dvara-panditas presided over by the chief abbot. The function of the Dvara-pandita was to test the scholarship of those

seeking admission to the college. During the reign of king Kanaka , the following were the Dvara- panditas of the establishment :

If this is correct, it must have been toward the end of Canaka’s reign given the generally accepted dates for Naropa (956-1041).

The curriculum of studies was similar to that of Nalanda. Here preference was given to the Tantric form of Buddhism. Grammar, logic, metaphysics, Tantras and ritualism were the main subjects specialised at the institution. The curriculum was thus not so wide or catholic as that at Nalanda, outlined above. Unfortunately we have no information of the duration or the gradation of the course at Vikramasila, but there is every probability that it was more systematically organised than was the case at any other centre of ancient Indian education.

Unlike at any other college, we find diplomas and titles being given to the Vikramasila students at the end of their course by the reigning kings of Bengal.

Tibetan authorities inform us that Jetari and Ratnavajra had received degrees at the hands of kings Mahlpala and Kanaka respectively.  The memory of the distinguished alumni of the place was kept ever green in the mind of the congregation by their pictures being put on the walls of the college halls This honour is known to have been shown to Nagarjuna and Atisa.

Destruction of the University:

In 1203, the Vikramasila monastery was destroyed by the Mahomadens under Bakhtyar Khilji, who seem to have mistaken it for a fort. At that time Sakya-sri-bhadra was at the helm of the monastic affairs.

The account of the destruction of the monastery has been preserved by the author of Tabakat-i-nasiri. We read, ‘The greater number of the inhabitants of the place were Brahmanas (i. e. Buddhist Bhikshus) and the whole of these Brahmanas had their heads shaven, and they were all slain. There were a great number of books on the religion of the Hindus there, and when all these books came under the observation of the Mussalmans, they summoned a number of Hindus that they might give them information respecting the importance of these books ; but the whole of the Hindus had been killed. On becoming acquainted (with the contents of those books), it was found that the whole fortress and city was a college’.

Sakya-srI-bhadra and a few others, who escaped the general slaughter, fled to Tibet. Such was the tragic end of this famous college.

Das, Indian Pandits in the Land of Snow.