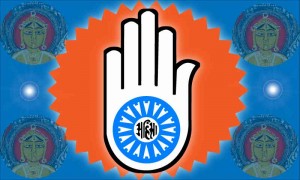 In ancient times Jainism was known by many names such as the Saman tradition, the religion of Nirgantha, or the religion of Jin.  Jin is one, who has conquered the inner enemies of worldly passions such as desire, hatred, anger, ego, deceit and greed by personal effort.  By definition, a Jin is a human being, like one of us and not a supernatural immortal nor an incarnation of an almighty God.  Jins are popularly viewed as Gods in Jainism. There are an infinite number of Jins existed in the past. The Jins that have established the religious order and revived the Jain philosophy at various times in the history of mankind are known as Tirthankars. The ascetic sage, Rishabhadev was the first Tirthankar and Mahavir was the last Tirthankar of the spiritual lineage of the twenty-four Tirthankars in the current era.

Though it is widely believed that Vardhamana Mahavira (? 599 B.C. – 527 B.C.?) founded Jainism, the Jain tradition maintains that he was the 24thTirthankara of Jainism. Rishabhadeva was the first Tirthankara. Parshvanatha was the 23rd Tirthankara. Jainism, founded about the 6th century B.C by Vardhamana Mahavira, known either as Tirthankaras(Saviours) or as Jinas (Conquerors), rejects the idea of God as the creator of the world but teaches the perfectibility of humanity, to be accomplished through the strictly moral and ascetic life.

The two main sects of Jainism are:

The Digambaras believe that a monk must give up all property including clothes and then only they get moksha. They also deny the right of women to moksha.

Jainism is both a philosophy and a religion. It is a heterodox philosophy in the sense that it does not uphold the authority of the Vedas.  It is atheist and does not accept the existence of God. Jainism rejects the concept of a Supreme Being or the Brahman as the creator of the world. The Tirthankaras are the liberated souls. The followers offer prayers to the Tirthankaras.

Jains believe in the philosophy of karma, reincarnation of worldly soul, hell and heaven as a punishment or reward for one’s deeds, and liberation (Nirvän or Moksha) of the self from life’s misery of birth and death in a way similar to the Hindu and Buddhist beliefs .The Jain philosophy believes that the universe and all its entities such as soul and matter are eternal (there is no beginning or end), no one has created them and no one can destroy them.

Jains do not believe that there is a supernatural power who does favor to us if we please him. Jains rely a great deal on self-efforts and self-initiative, for both – their worldly requirements and their salvation.

Jains believe that from eternity, the soul is bounded by karma and is ignorant of its true nature.  It is due to karma soul migrates from one life cycle to another and continues to attract new karma, and the ignorant soul continues to bind with new karma.

To overcome the sufferings, Jainism addresses the path of liberation in a rational way.   It states that the proper Knowledge of reality, when combined with right Faith and right Conduct leads the worldly soul to liberation (Moksha or Nirvän).

With regards to truth, the Jain philosophy firmly states that the whole truth cannot be observed from a single viewpoint.  To understand the true nature of reality, it is essential to acknowledge the multiple perspectives of each entity, situation or idea. This concept is called Anekäntväd.

The concept of universal interdependence underpins the Jain theory of knowledge, known as Anekäntaväd or the doctrine of many aspects. In this ever-changing universe an infinite number of viewpoints exist. These viewpoints depend on the time, place, circumstances, and nature of individuals. Anekäntaväd means acceptance of all viewpoints, which are positive in nature. This is known as non-absolutism.

This leads to the doctrine of Syädväd or relativity, which states that expression of truth is relative to different viewpoints (Nayas).  What is true from one point of view is open to question from another.  Absolute truth cannot be grasped from any particular viewpoint.  Absolute truth is the total sum of individual (partial) truths from many different viewpoints, even if they seem to contradict each other.

The ultimate goal of Jainism is for the soul to achieve liberation through understanding and realization. This is accomplished through the supreme ideals in the Jain religion of nonviolence, equal kindness, reverence for all forms of life, nonpossessiveness, and through the philosophy of non-absolutism (Anekäntväd).

In essence, Jainism addresses the true nature of reality.  Mahavir explained that all souls are equal in their potential for perfect knowledge, perfect vision, perfect conduct, unlimited energy and unobstructed bliss.

One can detach from karma and attain liberation by following the path of:

Jainism states that the universe is without a beginning or an end, and is everlasting and eternal.

Six fundamental entities (known as Dravya) constitute the universe.  Although all six entities are eternal, they continuously undergo countless changes (known as Paryäy). In these transformations nothing is lost or destroyed.

Lord Mahavir explained these phenomena in his Three Pronouncements known as Tripadi and proclaimed that Existence or Reality (also known as Sat) is a combination of appearance (Utpäda), disappearance (Vyaya), and persistence (Dhrauvya).

The Six Universal Substances or Entities (Dravyas) are as follows:

Jiva- The soul is the only living substance, which is consciousness and possesses knowledge. Similar to energy, the soul is invisible.  An infinite number of souls exist in the universe.  In its pure form each soul possesses infinite knowledge, infinite vision, perfect conduct, unobstructed bliss, and unlimited energy.

Pudgal- Matter is a nonliving substance, and possesses the characteristics such as touch, taste, smell, and color. Karma is considered matter in Jainism.  Extremely minute particles constitute karma.

Akash-The medium of motion helps the soul and matter to migrate from one place to another in the universe.

The space is divided into two parts.   Lokäkäsh, and Alokäkäsh.

Kal-Time measures the changes in soul and matter.  The wheel of time incessantly rolls on in a circular fashion.

The Doctrine of karma

The doctrine of karma occupies a significant position in Jain philosophy. It provides a rational explanation to the apparently inexplicable phenomena of birth and death, happiness and misery, inequalities in mental and physical attainments, and the existence of different species of living beings. It explains that the principle governing the successions of life is karma.

The seven or nine tattvas or fundamentals are the single most important subject of Jain philosophy. They deal with the theory of karma, which provides the basis for the path of liberation.

The Seven or Nine Tattvas (Fundamentals) are :

In Jainism, Ahimsä supersedes all concepts, ideologies, rules, customs and practices, traditional or modern, eastern or western, political or economical, self-centered or social.

Ahimsä (non-violence), Anekäntväd (multiplicity of views) and Aparigraha (non-possessiveness) are the cardinal principles of Jainism

.Aparigraha plays significant role in stopping the physical form of violence. And the proper application of Anekäntväd stops the violence of thoughts and speech. Anekäntväd is also called the intelligent expression of the Ahimsä. Non-violence in the center is guarded by truthfulness, non-stealing, celibacy and non-possessiveness.

Jainism is the first religion that has made vegetarianism a fundamental necessity for transforming consciousness. And they are right. Killing just to eat makes your consciousness heavy, insensitive; and you need a very sensitive consciousness – very light, very loving, very compassionate. It is difficult for a non-vegetarian to be compassionate; and without being compassionate and loving you will be hindering your own progress.