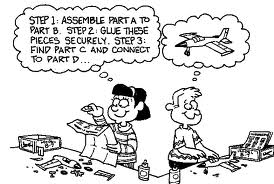 “If you can’t explain it simply, you don’t understand it well enough.” Albert Einstein

In 1956, the American educational psychologist Robert M. Gagné proposed a system of classifying different types of learning in terms of the degree of complexity of the mental processes involved. He identified eight basic types, and arranged these in the hierarchy shown in Figure 1. According to Gagné, the higher orders of learning in this hierarchy build upon the lower levels, requiring progressively greater amounts of previous learning for their success. The lowest four orders tend to focus on the more behavioral aspects of learning, while the highest four focus on the more cognitive aspects. 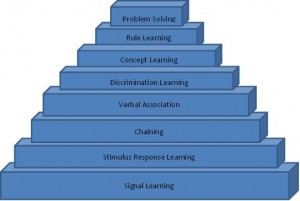 The most complete description of Gagne’s classes of behavior appears his ‘The conditions of learning’. Here he distinguishes eight types of learning, beginning with the simple forms and ending with the complex. Although he refers to these classes as learning types, he is primarily interested in the observable behavior and performance which ware the products of each such class.

This is the simplest form of learning, and consists essentially of the classical conditioning first described by the behavioral psychologist Pavlov. IIn this type of learning the animal or individual acquires a conditioned response to a given signal. Pavlov studied such learning in great detail. In it the responses are diffuse and emotional and the learning is involuntary. Examples are the withdrawal of the hand upon sight of a hot object, the salivation of a dog upon hearing food poured into his metal feeding dish, and the tearing of the eyes upon sight of an onion . The signals are the sight of the hot object, the sound of food being poured in the dish, and the sight of the onion. The conditioned responses are withdrawal of the hand, salivation, and tearing of the eyes.

This somewhat more sophisticated form of learning, which is also known as operant conditioning, was originally developed by Skinner.In this kind of learning, exemplified by animal training, the animal makes precise responses to specific stimuli. At first this training usually requires the use of a leash and a choke chain. As the dog learns particular responses for particular jerks of the leash and chain, his master rewards him with pats and praise. Later the master does not have to use the leash and chain; the animal sits, stays, or lies down upon hearing the simple verbal command. Whereas the responses in signal learning are diffuse and emotional, the responses in stimulus-response learning (often called operant conditioning) are fairly precise. Stimulus-response (SàR) learning may be used in acquiring verbal skills as well as physical movements. For example , the child may learn to say “Mama” on request, or an adult may learn the  appropriate response to the stimulus of a word in a foreign language.

This is a more advanced form of learning in which the subject develops the ability to connect two or more previously-learned stimulus-response bonds into a linked sequence. It is the process whereby most complex psychomotor skills (eg riding a bicycle or playing the piano) are learned.In this type of learning the person links together previously learned S-R’s. The links may  involve physical reactions such as an animal learning a series of tricks, each of which gives the cue to perform the next trick.This type of learning often seems to occur so naturally that we do not notice the specific series of events which led to it. Gagne  uses the example of a child who learns to say “doll” at the sight of a doll, then learns to lie down, hug the doll, and say “doll”.

This is a form of chaining in which the links between the items being connected are verbal in nature. Verbal association is one of the key processes in the development of language skills.This learning is a type of chaining, but the links are verbal units. The simplest verbal association is the activity of naming an object, which involves a chain of two links: An observing response enables the child to identify properly the object he sees; and an internal stimulus enables the child to say the proper name. When the child can name an object “ball” and also say “ the red ball”  he has learned a vernal association of three links. Gagne calls another common verbal association translation responses; in these  the learner frequently acquires verbal associations by verbal mediation- an internal link which helps him associate.

This involves developing the ability to make appropriate (different) responses to a series of similar stimuli that differ in a systematic way. The process is made more complex (and hence more difficult) by the phenomenon of interference, whereby one piece of learning inhibits another. Interference is thought to be one of the main causes of forgetting.In this type of learning the student must learn different responses for stimuli which might be confused. The student learns to distinguish between motor and verbal chains he has already acquired. Teachers, Gagne suggests, engage in discrimination learning when the devise means for calling each student by his correct name.

This involves developing the ability to make a consistent response to different stimuli that form a common class or category of some sort. It forms the basis of the ability to generalise, classify etc.In learning a concept we respond to stimuli in terms of abstract characteristics like color, shape, position and number as opposed to concrete physical properties like specific wavelengths or particular intensities. In concept learning the student’s behavior is not under the control of particular physical stimuli but of the abstract properties of each stimulus. Concepts have concrete references even though they are learned with the use of language.

. This is a very-high-level cognitive process that involves being able to learn relationships between concepts and apply these relationships in different situations, including situations not previously encountered. It forms the basis of the learning of general rules, procedures, etc.In learning a rule we relate two or more concepts. Rules are, in effect, chains of concepts. We may represent knowledge as a hierarchy of rules, in which we must learn two or more rules before learning a  higher order rule which embraces them. If the student has learned the component concepts and rules, the teacher can use verbal instruction alone in leading the student to put the rules together.

This is the highest level of cognitive process according to Gagné. It involves developing the ability to invent a complex rule, algorithm or procedure for the purpose of solving one particular problem, and then using the method to solve other problems of a similar nature.

In the set of events called problem solving, individuals use rule to achieve some goal. When the goal is reached, however the student has learned something more and is then capable of new performances using his new knowledge. What is learned, is a higher order rule, the combined product of two or more lower order rules. Thus the problem solving requires those internal events usually called thinking.. Without knowledge of the prerequisite rules, the problem can not be solved. 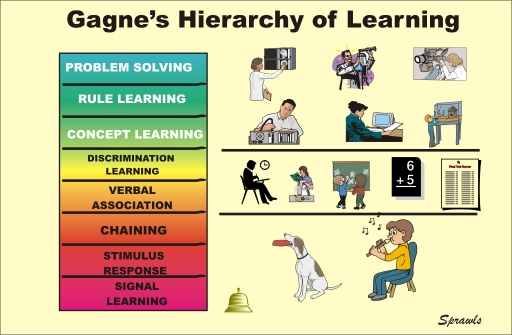