Pythagoras of Samos was an Ionian Greek philosopher, mathematician, and founder of the religious movement called Pythagoreanism. 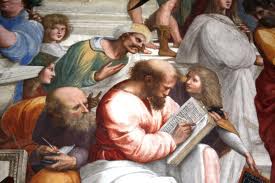 There is geometry in the humming of the strings; there is music in the spacing of the spheres.

The thinkers before Pythagoras were, interested in the problem of the essence of things. What, they asked, is the stuff of which the world is composed? They regarded it as a concrete, determinate substance, like water or air, or as something from which such elements are differentiated. We come now to a school of philosophers who turned their attention particularly to the question of form or relation. As mathematicians they were interested in quantitative relations, which are measurable, and began to speculate upon the problem of the uniformity and regularity in the world ,attempting to explain this fact by making an entity of number  and setting it up as the principle of all being.

Like Thales, Pythagoras is rather known for mathematics than for philosophy. It is stated that he was a disciple of Anaximander, his astronomy was the natural development of Anaximander’s. Also, the way in which the Pythagorean geometry developed also bears witness to its descent from that of Miletos.

After Pythagoras introduced the idea of eternal recurrence into Greek thought, which was apparently motivated by his studies of earlier Egyptian scriptures, the idea soon became popular in Greece. It was Pythagoras’ ambition to reveal in his philosophy the validity and structure of a higher order, the basis of the divine order, for which souls return in a constant cycle.

“Pythagoras believed in metempsychosis and thought that eating meat was an abominable thing, saying that the souls of all animals enter different animals after death. He himself used to say that he remembered being, in Trojan times, Euphorbus, Panthus’ son who was killed by Menelaus. They say that once when he was staying at Argos he saw a shield from the spoils of Troy nailed up, and burst into tears. When the Argives asked him the reason for his emotion, he said that he himself had borne that shield at Troy when he was Euphorbus. They did not believe him and judged him to be mad, but he said he would provide a true sign that it was indeed the case: on the inside of the shield there had been inscribed in archaic lettering EUPHORBUS. Because of the extraordinary nature of his claim they all urged that the shield be taken down – and it turned out that on the inside the inscription was found.” (Diogenes Laertius)

This is how Pythagoras came to mathematics. It could be said that Pythagoras saw the study of mathematics as a purifier of the soul, just like he considered music as purifying. Pythagoras and his disciples connected music with mathematics and found that intervals between notes can be expressed in numerical terms. They discovered that the length of strings of a musical instrument corresponds to these intervals and that they can be expressed in numbers. The ratio of the length of two strings with which two tones of an octave step are produced is 2:1.

Music was not the only field that Pythagoras considered worthy of study; in fact he saw numbers in everything. He was convinced that the divine principles of the universe, though imperceptible to the senses, can be expressed in terms of relationships of numbers. He therefore reasoned that the secrets of the cosmos are revealed by pure thought, through deduction and analytic reflection on the perceptible world.

The Pythagoreans take note of the fact of form and relation in the world ; they find measure, order, proportion, and uniform recurrence, which can be expressed in numbers. Pythagorean without number, they reasoned, there can be no  such relations and uniformities, no order, no law  hence number must lie at the basis of everything; numbers must be the true realities, the substances and grounds of things, and everything else an expression of numbers. They made entities of numbers, just as many persons to-day make entities of the laws of nature, speaking of them as though they were the causes of whatever happens. In , their delight over the discovery that there is a numerical relation, for example, between the length of the string and the pitch of the tone, they called number, which is only a symbol or expression of the relation, the cause of the relation, and placed number behind phenomena as their basal principle and ground. This eventually led to the famous saying that “all things are numbers.” Pythagoras himself spoke of square numbers and cubic numbers, and we still use these terms, but he also spoke of oblong, triangular, and spherical numbers. He associated numbers with form, relating arithmetic to geometry. His greatest contribution, the proposition about right-angled triangles, sprang from this line of thought:

Now if number is the essence of things, then whatever is true of number will be true of things. The Pythagoreans, therefore, devoted themselves to the study of the countless peculiarities discoverable in numbers, and ascribed these to the universe at large. Numbers are odd and even ; the odd cannot be divided by two, the even can; hence the former are limited, the latter unlimited. Hence the odd and the even, the finite and the infinite, the limited and unlimited, constitute the essence or reality. So, too, nature is a union opposite, of the odd and the even, the limited and unlimited. A table of ten such opposites is offered: limited and unlimited; od^ and even; one and many ; right and left ; male and female ; rest and motion ;straight and crooked; light and darkness; good and bad; square and rectangle. Each of the numbers from one to ten has its peculiarity.

The corporeal world is also numerical, being based on the unit. The point is one, the line two, the figure three, the solid four. Again, earth is a cube; fire, a tetrahedron; air, an octahedron, water, an icosahedron; and so on. That is, the lines and surfaces of bodies were conceived as entities having an independent existence; for there can be no bodies without lines and surfaces, whereas lines and surfaces can be thought without bodies. The spatial forms are the causes of bodies, and since these forms

The Pythagorean School also gave its attention to the study of astronomy and furnished a number of noted astronomers. In the center of the universe, which forms a sphere?

they placed the central fire; around it the planets revolve, turned by means of transparent moving spheres to which they are attached. The fixed stars are fastened to the highest arch of heaven, which revolves around the central fire in the course of 36,000 years; below this follow, in concentric spheres, Saturn, Jupiter, Mars, Mercury, Venus, the sun, moon, and earth. But since ten is the perfect number, there must be ten heavenly bodies; hence, the Pythagoreans place between the earth and the central fire a counter-earth, which screens the

Fantastic though these astronomical notions may seem, they paved the way for the construction of the heliocentric theory, which was offered in antiquity by Aristarchus of Samos, about280 B.C. In the course of time, the counter-earth and central fire were given up; and Hicetas and Ecphantus taught theaxial rotation of the earth. Heraclides found reason to reject the view that all the planets revolve around the earth in concentric spheres, and connected their movements with the movement of the sun. Aristarchus concluded from the larger size of the sun that it did not revolve around the earth and made the earth move round the sun.

This shows how Pythagoras’ formulation immediately led to a new mathematical problem, namely that of incommensurables. At his time the concept of irrational numbers was not known and it is uncertain how Pythagoras dealt with the problem. We may surmise that he was not too concerned about it. His religion, in absence of theological explanations, had found a way to blend the “mystery of the divine” with common-sense rational thought.

From Pythagoras we observe that an answer to a problem in science may give raise to new questions. For each door we open, we find another closed door behind it. Eventually these doors will be also be opened and reveal answers in a new dimension of thought. A sprawling tree of progressively complex knowledge evolves in such manner. This Hegelian recursion, which is in fact a characteristic of scientific thought, may or may not have been obvious to Pythagoras. In either way he stands at the beginning of it.